How to Design Voice User Interfaces? 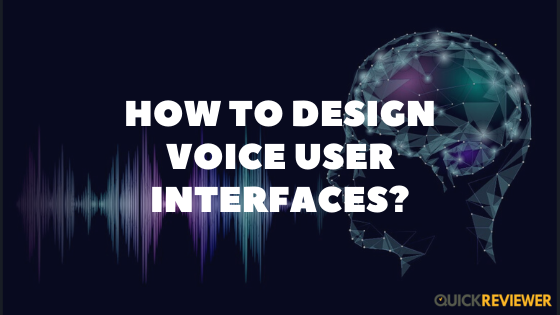 A simple speech can provide solutions and complete tasks without much hassle.

You all must be aware of Alexa, and most of us are using them at home or office space. Alexa and others such as Google Assistant, Siri, Cortana, etc., are all examples of such Voice User Interface (VUI).

Voice User Interface is a speech recognition technology that allows the user to interact with electronic devices like computers, smartphones, etc., through speech or voice commands.

Voice UI, as the name suggests, uses voice as the primary mode of interaction with its unique features. It is the visual, audio, graphical and tangible interface that allows voice interaction between humans and devices.

The voice interface allows the users to initiate automated services and deploy the daily tasks quickly and in an intuitive manner.

It is found that users prefer to have a conversational tone when using Voice UI’s. For example, Amazon’s Echo Dot, Apple’s Siri, Google Assistance, etc., they have become a known household name now.

People are most likely to interact about the weather, finding the nearest grocery store, match scores, and to play music, among other things. Though more can be achieved with the Voice UI’s help, like booking a cab, link apps with each other and then fetch data, perform a web search, setting timers and reminders, etc.

If you are new to Voice UI, then we can help you out to design a voice user interface (VUI). It is a speech recognition tool, thus one should carefully list the do’s and don’ts and the kind of conversation that a user would take out.

What is the future of User Interface (UI) Design?

The way we interact and communicate enhances the comprehensibility of our words. Thus, the main challenge for designers is to tackle this communication problem and bridge the gap between the user and artificial intelligence.

Below are some points that will give an insight on how to design a voice user interface.

# 1. Understand the Intent of User

Normally people interact with each other on a regular basis, and even with 4-5 words, they know what the other person is saying. The same kind of interaction is expected by the people when they are conversing with the machine.

Designing for Voice UI requires explicit instructions that can help it understand the intent of the user.

The interaction between the two should be in such a manner that the person doesn’t feel s/he is talking to a cold-hearted bot/ machine. For this, one needs to apply smart technology just like Amazon used in Alexa.

For e.g. If someone asks, ‘Alexa, what am I thinking?’

To this, the device would reply, ‘You are thinking that if Alexa guesses what I am thinking, then I would freak out!’.

Such interaction is required to make the person comfortable while interacting with a device.

We all need feedback. So, when it comes to an audio-based product, then visual is necessary. For example, when we ask a question to someone, we expect an answer or reply.

When we WhatsApp our friends or family members, we wait for their response. If there is no reply from their end, then we think that there is some communication problem or gap, be it on the smartphone or the network.

The same is the case with Voice UI products. People want to know whether they are being heard or not. A visual help to make the conversation interactive and alluring. Amazon adopts this visual tactic by having a blue light at the top of the device.

7 Principles of Using Animation in UX

One can add light or a wave-like visual or anything which indicates the user that the bot is saying something. These are the most adaptable methods that are used to design a voice user interface.

If you think that the users are going to understand the product and comply with all the details. Then you are surely heading in the wrong direction.

There is a guiding manual or display when you install a game to play. Why do you think the guidance is provided? Users must have played a similar game or version somewhere, but still, there is a demo link or video provided.

It is so the users are well acquainted with the product and that they do not have any doubt or false expectations.

Thus, adding an introductory video or tour would be an excellent tactic to make the users understand the kind and type of conversation they can have with the device.

#4. Limit the choices and information

Browsing and verbal content are two different cases wherein users can access a number of information while browsing visual content, but the same is not the case with verbal ones.

In the case of verbal content, you need to give clear, concise and brief information, so that the user does not get confused or irritated with lots of information and briefing.

Think about you having a problem with your card and calling a bank support care. How would you feel when you have to listen to a number of solutions and then avail for the desired option at the last? It is indeed annoying and frustrating at the same time.

The same is the case if you try or think of keeping many options. It not only upsets the user but also provokes him/her to drop your services.

If there is a long list of options, then it can be solved by grouping and providing the most popular ones. The users can add more options if they like by asking or raising a request.

The voice interaction, when done right can improve the efficiency of the operation. The flexibility can be achieved in the voice interface when one command can be navigated in different ways.

For example, you say ‘Weather forecast for today?’ It can also be spoken as ‘How’s the weather tomorrow?’, which provides flexibility and interest amongst the users.

Natural language understanding platforms or human-like maneuvering can be applied to handle such kind of free-form inputs.

You should design the voice user interface in such a way that it improves accessibility and the ability to remain fully human while interacting with the technology.

The popularity of Voice User Interface technology is increasing and has led to the dawn of the Voice UI Revolution. With the technology advancement and ease of use, the interest and expectation of users have increased drastically.

The future of VUI is long and bright with the aim to provide users with an immersive experience. In the coming years, a visionary process for Voice UI will be designed to adapt, learn, understand, and comprehend the biological evolution of its user. That will be the real technological advancement.

What do you think, how bright is the future of VUI? Will it become a primary means of interaction? Let us know what you think!

Before you Leave, Read this

How designers are showing creative support during coronavirus